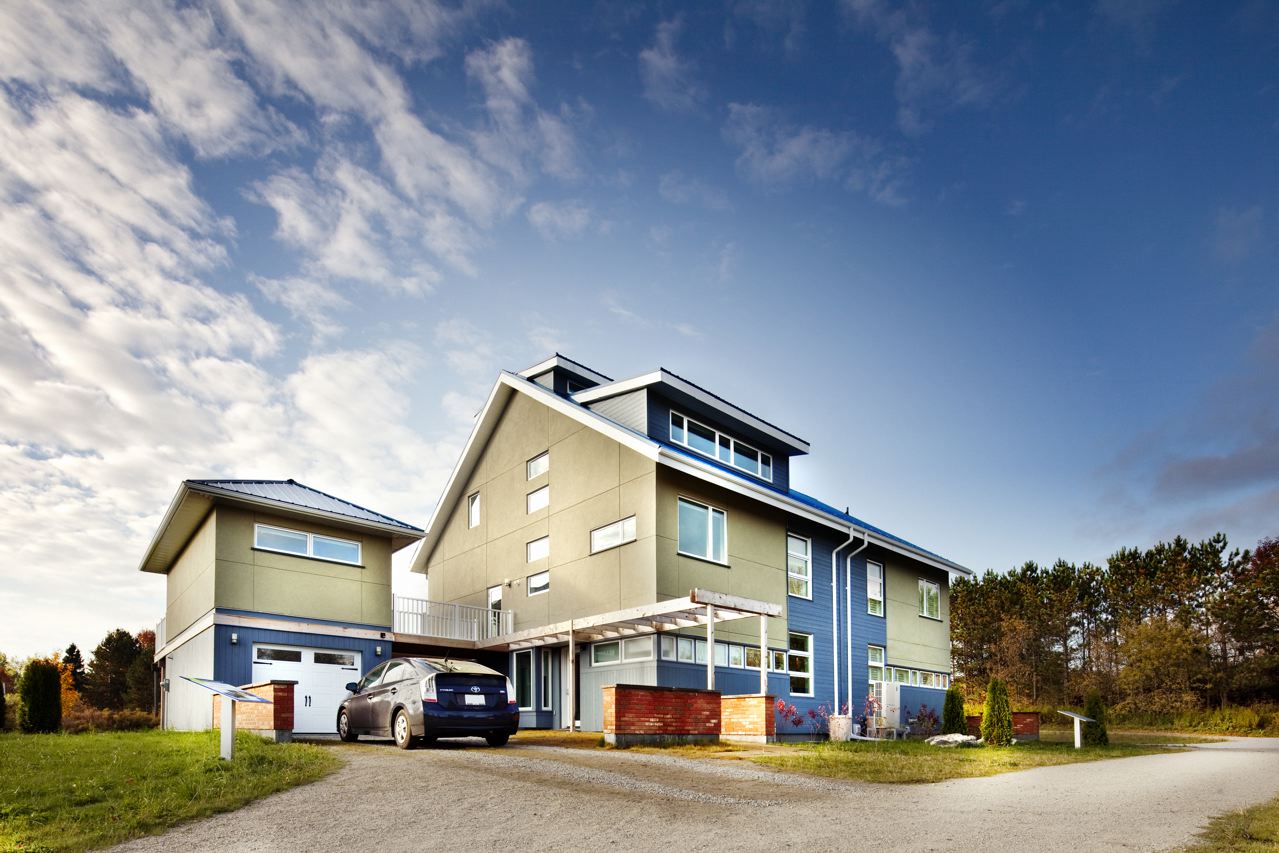 Heat pumps are among the most energy efficient technologies for heating and cooling buildings and providing hot water. They function by moving heat from one place to another. Usually the ground or air acts as the source and sink for heat, and since energy from these sources is free, the only energy needed is the electricity required to operate the heat pump and forced air or hydronics distribution systems.

In recent years, improvements in the operation and efficiency of heat pumps have prompted leaders in the residential construction sector to take a second look at these technologies. The first question, of course, is how well they perform in cold Canadian climates. This was what we set out to understand through a one year monitoring program conducted with researchers from Ryerson University. The heat pumps evaluated were installed in two, comprehensively monitored, semi-detached LEED™ platinum demonstration houses owned and operated by Toronto and Region Conservation at the Living City Campus in Vaughan, Ontario.

Although not identical, the two houses, referred to as House A and House B, have similar floor areas, internal volumes, and levels of insulation. House A has a 10.5 kW (3 ton) high efficiency variable capacity air-to-air source heat pump manufactured by Mitsibushi™. It includes a direct expansion coil air handling unit (AHU) and a multi-speed fan to supply warm and cold air for space heating and cooling. The system is coupled with a mini-boiler, which was not needed over the period of study because the ASHP alone was able to supply sufficient heat, even during cold periods down to -22°C.

The main heating and cooling system in House B is a 13.3 kW high efficiency ground source heat pump (GSHP) manufactured by WaterFurnace™. It is coupled with two 152 m (500 ft) horizontal loops in the yard. The installation uses a buffer tank to store water, which is then distributed to an in-floor radiant heating system during the winter, and through the zoned air handler for cooling the house

Data for the study were collected year round and a energy performance model (TRNSYS) was calibrated to simulate energy performance over the entire heating (October 1 to May 21) and cooling seasons (May 22 to September 30) based on climate normals derived from a 30-year historical record of solar irradiance and temperature.

Results of the evaluation showed the heat pumps to have performed very well with heating and cooling efficiencies above both Energuide and manufacturer rated performance (Table 1). During the heating season, both systems had coefficients of performance (COP) above 3, indicating that the systems provided over 3 kWh of output heat for each kWh of energy consumed. During the cooling season, COPs were 5, and Seasonal Energy Efficiency Ratios were well above rated performance levels.

These ratings are based on the performance of the heat pump systems without the forced air and hydronics distribution system specific to each house. Overall ‘as installed’ performance declined dramatically when the electricity consumed by the distribution systems was included in the assessment. As shown in Table 1, cooling season COPs for both systems fell by more than 30%. During the heating season, the ASHP system suffered a more significant decline because the air handling unit used with the ASHP consumed much more electricity than the water pump used with the GHSP. Further investigations showed that the high electricity draw by the distribution systems was caused, in part, by the way in which the units were being operated. Simulating these during the cooling season to operate only when the heat pump and compressors were on caused a reduction in electricity consumption of between 28 and 37%. The difference between ‘stand alone’ and ‘as installed performance’ highlights the importance of understanding the various components that make up the system, including HEPA filters and heat recovery ventilators, and ensuring these are optimally configured to maintain high levels of efficiency and energy performance.

It was surprising that the ASHP performed almost as well as the GHSP given that the ground maintains a much more constant temperature than air. The effect of source temperatures on performance was evident in the COP data. While the GSHP maintained a relatively constant COP of roughly 3 regardless of outdoor temperatures, the COP of the ASHP declined from 4.9 to 1.6 as outdoor temperatures fell from 9 to minus 19˚C during the winter. Below minus 24 ˚C, the ASHP was less efficient than a conventional electric heating system, and a supplementary heat source would be required (Figure 1).

Part of the explanation for the impressive ASHP performance lies in its capacity to vary the speed of the compressor. At temperatures warmer than minus 15˚C, the variable capacity ASHP compressor operated on part load, drawing less than half the electricity (2 – 3 kW) required under full load conditions (6 kW). Only when outdoor temperatures dropped below minus 15˚C did the ASHP compressor switch to full load. Heat pumps that operate on full load only are less efficient because, compared to variable capacity systems, they cycle on and off more, and provide less overall heat output per unit of electricity consumed.

We see this with the GSHP, which only had the capacity to operate at full load, causing the compressor to cycle on and off much more often than the ASHP compressor. During the cooling season test period, for instance, the compressor operated between 1 and 7 hours and cycled on and off up to 25 times a day. Over the same period, the ASHP variable capacity compressor operated between 3 and 11 hours per day and turned on and off only once. This cycling not only reduces energy efficiency, but also wears down the equipment and adversely affects thermal comfort.

Simulations of performance in 5 major cities – Halifax, Montreal, Toronto, Edmonton and Vancouver -showed that both systems would function well. As expected, however, performance of the ASHP was more sensitive to differences in air temperature. In Montreal and Edmonton, for instance, the ASHP had lower COPs than other cities. These would be further reduced if supplementary heat at the coldest temperatures was included. In Vancouver, the warmer and more even year round temperatures resulted in higher ASHP performance. During the cooling season, the GSHP system slightly outperformed the ASHP in all cities, with COPs ranging between 5.8 and 6.1.

Ultimately, the equipment choice will be largely motivated by cost and energy savings. Based on monitoring data collected in this assessment, the ASHP was found to be more affordable overall. Significant savings are associated with not having to install a ground loop. Also, long term performance of the ASHP is not contingent on ensuring that heating and cooling loads are in balance. If life cycle costs and benefits are considered, the price gap may narrow because the ground loop is a one time cost and the GSHP compressor is subject to fewer mechanical and thermal stresses (since it is indoors) with a longer expected service life. Natural gas furnaces are currently more cost competitive at the residential scale, but as gas prices creep up again, we may see more heat pump systems in city neighbourhoods.

Table 1: ASHP and GSHP Performance. Manufacturer and Energuide ratings apply to ‘stand alone’ system. The ‘as installed’ system includes the electricity consumed by the AHU and hydronics distribution systems