The Bentway: hidden in plain sight 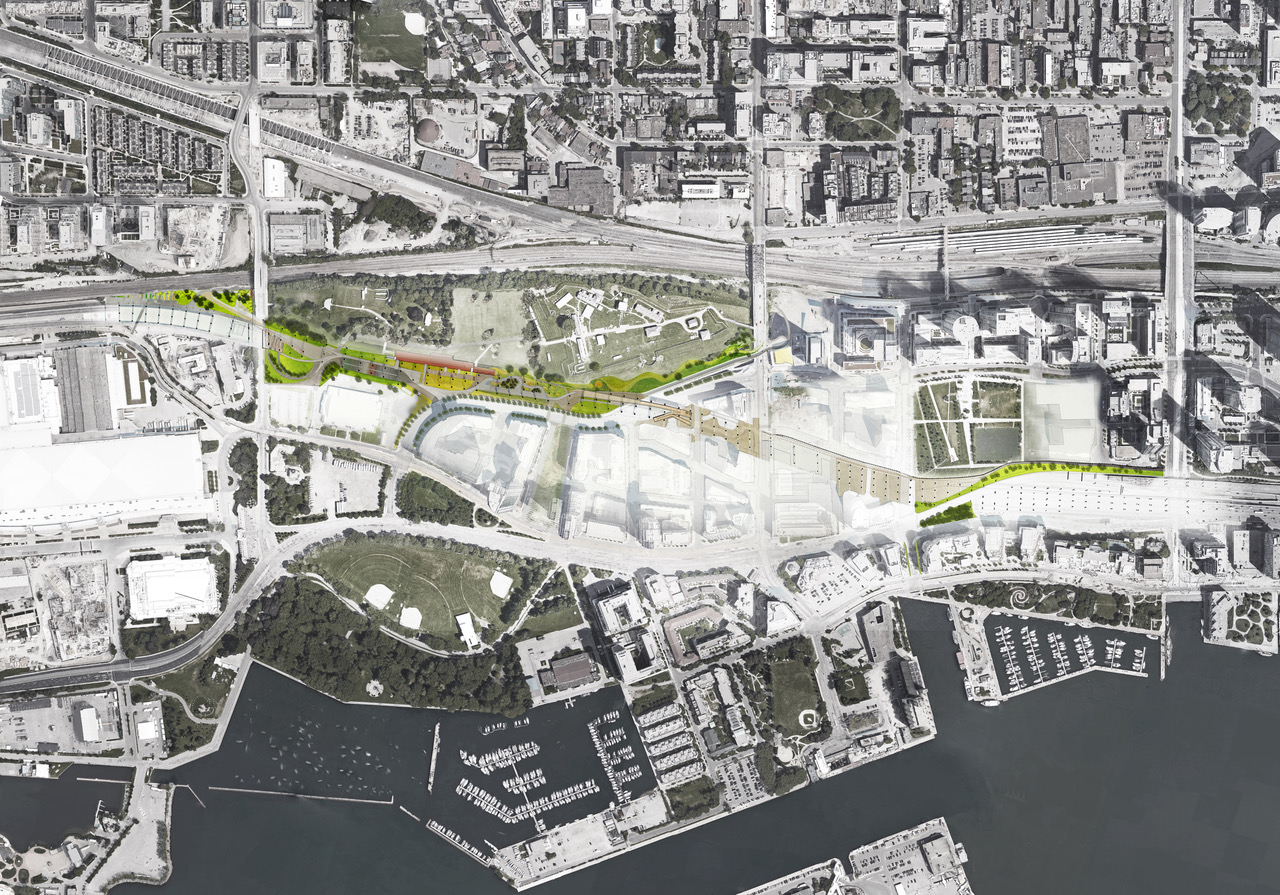 The Bentway: hidden in plain sight

The Bentway was named through a public competition. The “Bents” are the composite column-and-beam structures that frame the space under the Gardiner Expressway.

The Bentway reveals the possibility of a new cultural landscape beneath Toronto’s Gardiner Expressway, celebrating its monumental presence by inviting a new generation of use and activity. A new place in the city, it offers a dynamic and vital public space for all citizens that links physical and cultural communities, neighbourhoods and people, catalyzing an unprecedented level of community engagement and creating a legacy for the city. This re-adaptation of a1.75 kilometre stretch of land beneath the Gardiner expressway – from west of Strachan Avenue to Spadina – was advanced and supported by a $25-million donation by Judy and Wil Matthews, dedicated urbanites and long-time Torontonians. The donors’ profound love for Toronto and their focus on public space as a means to enhance the vitality and amenity of the city prompted them to embrace this public realm initiative. The first phase of the project – 1.1km stretching from Strachan Avenue to just before Bathurst Street – is now under construction. It is being realised by the City of Toronto and Waterfront Toronto with additional assistance from Artscape. The design was developed by myself in collaboration with the urban design and landscape architecture PUBLIC WORK. The Bentway Conservancy – a new independent not-for-profit organization – has been created to operate, maintain and program the space.

As we make the transformation from a mid-20th century auto-oriented city to a denser, more sustainable, mixed urban place we need to re-imagine our urban infrastructure. The Bentway’s recycling of the Gardiner Expressway – an unloved piece of utilitarian urban infrastructure is a demonstration of this new way of thinking and a critical resourcefulness. It involves re-purposing what we have inherited in new and unexpected ways to meet pressing needs, reinterpreting a structure essentially designed to move vehicles to serve a whole range of new social, cultural and economic purposes while providing a new model for the governance and stewardship of public space through a not-for-profit, The Bentway Conservancy. It is a creative response to a downtown core experiencing radical growth and a particular public space challenge – how to expand common ground in one of the most diverse cities in the world (as dramatically attested to the 2016census, which shows that more than half of respondents – 51.5 per cent – identify as belonging to a visible minority). Seeing the undercroft of this elevated structure constructed in mid-twentieth century with fresh eyes opened up a whole world of new possibilities. In 2011 I had written an article in the Fife and Drum about the potential for this space, combined with some 50 acres of green space at historic Fort York, to be a new “central park’ for the series of newly emerging neighbourhoods surrounding it including Liberty Village, Fort York Neighbourhood, City Place, Bathurst Quay and The Niagara Neighbourhood –ow with over 70,000 residents newly arrived in the last fifteen or so years, many of whom were born outside the country and with thousands of their children now living in high-rise neighbourhoods. Through the great act of civic generosity by Wil and Judy Matthews that vision is being realized.

The plan for this prime space transforms this portion of the Gardiner Expressway’s neglected but grand under belly structure into compelling sites of activity and public gathering. This ever-so-slightly curved linear free-standing colonnade has the potential to be so many things: at 24 metres wide and 14.5 metres high, the dramatic proportions of this 1.75 kilometre-long space present endless opportunities for diverse programs. Defined by the series of concrete post-and-beam structural elements (‘bents’) supporting the Gardiner, the space can be fashioned to house a kaleidoscope of year round activities: gardens, gathering spaces, performance areas, play spaces, a continuous multi-modal trails and other recreational amenities, cafés, public markets, art fairs and exhibitions, creative workshops, festivals, theatre and musical performances. Over time, a connective cultural precinct will emerge, a place that activates and inspires creativity in a way that only Toronto can.

The project leverages the city’s recent $150 millions investment in the restoration of this part of the Gardiner deck structure. This area of the city is much like an island, cut off from the surrounding areas by the Gardiner and railway to the north, Lakeshore Blvd. to the south, The Gardiner again as it curves across Bathurst St to the east and the massive underutilized Exhibition Place to the west. The Bentway changes this – it connects what is currently disconnected on all sides – close but seeming inaccessible. Existing key landmarks serve as anchors in the comprehensive scheme: They include Historic Fort York, with its new Visitor Centre and “Liquid Landscape” along Fort York Boulevard recalling Lake Ontario’s former shoreline, plus the new Fort York Library – which now welcomes neighbourhood residents to its airy and well-lit spaces. Contiguous green spaces such as June Callwood Park, Coronation Park, the Toronto Music Garden (also supported by the Matthews), the Martin Goodman Waterfront Trail, the soon to come extension of the West Toronto Rail Path and the new Fort York Pedestrian and Cycle bridge from the expanded Stanley Park, all converge on this strategic site. Other significant developments are on the horizon, such as the Block 31 community centre and schools in City Place, and the historic Loblaw warehouse conversion and associated redevelopment at the corner of Bathurst Street and Lake Shore Boulevard.

Programmatically The Bentway will be a space like no other – re-imagined, unexpected, only in Toronto. The continuous multi-use trail and series of public spaces will transform this area under the Gardiner into a new gathering place. As a forum for social engagement, artistic experimentation and creative expression, the site brings to life the multilayered history of the area as a gathering place for indigenous peoples, a strategic military location at the foot of Fort York, the arrival of the railway era in mid-nineteenth century and now an artery linking former industrial lands and new post-industrial neighbourhoods along the city’s waterfront. As a new model for public space in Toronto the Bentway will reconnect visitors with this unique and evolving landscape.
The Bentway will present an all-season programme of public events, including a unique skate trail experience, recreational amenities, public markets, educational workshops, public art installations, theatre, dance, musical performances and more. Events will range in scale and scope but all will focus on encouraging a sense of discovery, openness and shared community experience. Through arts, culture, recreation, and more,

The Bentway will challenge the way we inhabit public space and spark new opportunities in Toronto and beyond. As this occurs the Bentway is stimulating more changes in its vicinity forming a new network of public space in what was formerly an underappreciated urban vacuum. This is a case of simultaneous discovery as similar projects re-appropriating post – industrial wastelands as new forms of public space appear in many places. The Bentway has been invited to join The Highline Network http://network.thehighline.org/ a network of 19 similar North American projects to share best practices and insights. The Bentway is stimulating change, encouraging a new way of looking at urban infrastructure, and creating new opportunities for gathering and activity. As construction continues, the first sections will open to the public in very soon – a skate trail this winter and the full extent of the site in June 2018. It will be fascinating to see how this formerly neglected vacuum is received by the public.

Ken Greenberg is an urban designer, teacher, writer, former Director of Urban Design and Architecture for the City of Toronto and Principal of Greenberg Consultants. For over four decades he has played a pivotal role on public and private assignments in urban settings throughout North America and Europe, focusing on the rejuvenation of downtowns, waterfronts, neighborhoods and on campus master planning, regional growth management, and new community planning. A frequent writer for periodicals, he is the author of Walking Home: the Life and Lessons of a City Builder published by Random House. His current major project is as urban design lead and client representative for Project:Under the Gardiner in Toronto.