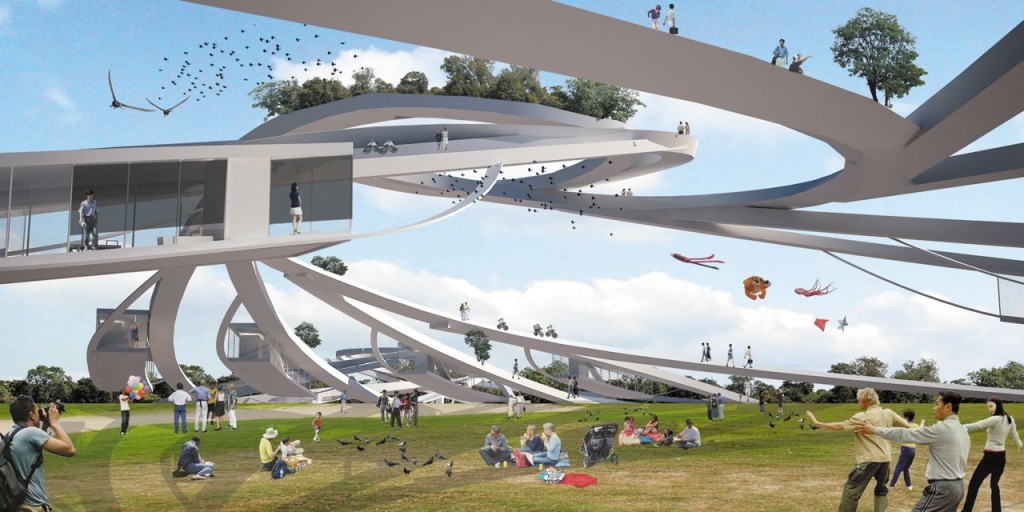 Right now, it’s in the experimental design stage, but an ambitious concept put forth by Bangkok’s MAB Studio takes aim at the flooding problem in Thailand in a back-to-the-future way.

It could be called Sustainable Living 101. As it stands, though, the apt name for the project is Amphibious Habitat; and it has lofty goals – patterning residential buildings after the complex natural workings of coastal mangrove forests.

As MAB’s Achawin Laohavichairat explains to Green Living and Sustainable Strategies magazine, Thailand’s history has much in common with water communities such as Venice, Italy.
“Our climate and our typography teaches us to live with water,” he says. “Whether it is a Thai house, a floating market, transportation by water – it’s part of our past.” Laohavichairat believes Thailand has gotten away from its sustainable watery roots – citing the unstable delta flood tide situations and coastal erosion originating from industrial destruction – and the Amphibious Habitat idea offers a way out of the current dilemma.

“This concept is just an idea to create space that supports living with water,” he says. “If we can’t survive with water like our ancestors did, then we should look at nature and perhaps we can learn how to do that.”

By studying the mangroves, MAB found that the trees were able to adapt to surrounding environment and weather changes. One example: mangrove roots protect small fish when water levels change. “We tried to design buildings that can exist within such a changing environment, when water moves up and down (such as flooding conditions),” Laohavichairat says. He also says MAB looked at biological mimicry, how people living in this type of residential project could draw inspiration from the natural ebb and flow.

In a perfect world, the Amphibious Habitat design would become part of a new community, the architect says, that could adapt and support an unstable delta by utilizing the natural ecological system. “The architecture would adjust to the changing environment and would provide infrastructure, urban facilities, energy management and living space to encourage the life process.”

For now, the MAB team is buoyed by the selection of the concept for the finals of a Thai design competition – the ASA (Association of Siamese Architects) Exposition in 2012. As for future aspirations?  “As a society, we don’t need to escape from these kinds of [survival] problems, we need to face them and learn how to live with nature.”