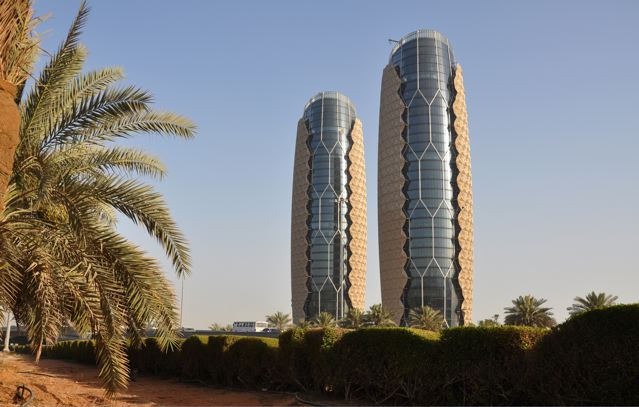 winning design is derived from an algorithmic composition,

influenced by Islamic principles of design, that has been

supplemented by the application of a dynamic translucent

the movement of the sun, reducing solar gain on the

building facade by up to 50 per cent. The resulting composition

seeks to create a building which is both culturally and

environmentally responsive, reflecting the aspirations of

the brief while also respecting the emergent Abu Dhabi

is targeting a LEED Silver rating.

an outstanding landmark building that would provide a

the region’s architectural heritage together with the status of the

The aspirations of the brief were consistent with a number of

other initiatives within Abu Dhabi at that time, namely the recent

initiative on renewable technology, together with the recently

In order to generate the form of the towers, Aedas applied the

Islamic architecture. Geometric composition has been a defining

characteristic of Islamic architecture for centuries, the circle and

rotation reflecting the concept of unification and unity evident in

nature; an important concept in Islam and in the emerging science Following an intense period of analysis, and influenced by

both the client’s brief and also the orientation of the site,

Aedas began to develop the distinctive form of the towers

geometry. Their starting point was two cylindrical towers; a

circle producing the most efficient form in terms of wall to

floor area while also creating the greatest volume with the

The circular plan form was articulated to reduce solar exposure

on the most heavily exposed elevations and, in doing so, began

to generate a natural orientation. The form of the towers was

then sculpted around the core, more narrow at the base and at the

top, but broader around the intermediate floors. The crown of

mounted photovoltaics. Sky gardens were introduced in the most

while providing an amenity space for users.

Having established an underlying geometry, the team was then

able to erode the elevation in order to generate the structural

well in terms of its seismic response, (due to the number of

vertical elements), well in terms of bracing (due to the number

of diagonal elements), well in terms of redundancy (due to the

(by providing an aerodynamic profile). At the same time as the form of the towers was being developed,

from the extremely high levels of solar heat gain which could

be expected. Drawing upon their knowledge of the region’s

vernacular architecture, the practice became intrigued by the

use of mashrabiya. The mashrabiya is a popular form of

wooden lattice screen found in Islamic architecture as a device for

Aedas have reinterpreted the concept of the mashrabiya at the

Al Bahr towers by developing a series of translucent umbrella-like

components which open and close in response to the movement

of the sun. Each shading device is driven by a linear actuator and

dramatically reduces the amount of solar gain striking the façade.

The dynamic screen avoids the need for heavily tinted glass,

thereby reducing the need for significant artificial lighting while

providing better views for occupants of the building. This is the first

time such a moveable facade has been used at this scale, enabling

a reduction in solar gain of over 50%. The facade will be controlled

via the building management system, creating an intelligent facade

Some of the benefits provided by the dynamic facade

• Less frequent use of internal blinds;

• Improved views for occupants of the building.

• Total site CO2 emissions reduction of over 1,750 tonnes per year.

The building, which also incorporates the use of solar thermal

Aedas is an international practice working in architecture, interior

consultancy through 39 offices in Europe, the Middle East, Asia

and the Americas. The group is supported by a research &

development group that has been recognized for its pioneering

modeling. Aedas has a strong commitment to the cities and

communities in which its architects live and work. The practice

was named “International Practice of The Year” by the Architect’s

Journal in May 2010. Some of the key projects Aedas is currently

in New York and Farringdon Station, forming part of Crossrail, in

London. In 2009, Aedas completed the first phase of the Dubai

Metro. Other projects in the region include Cleveland Clinic for