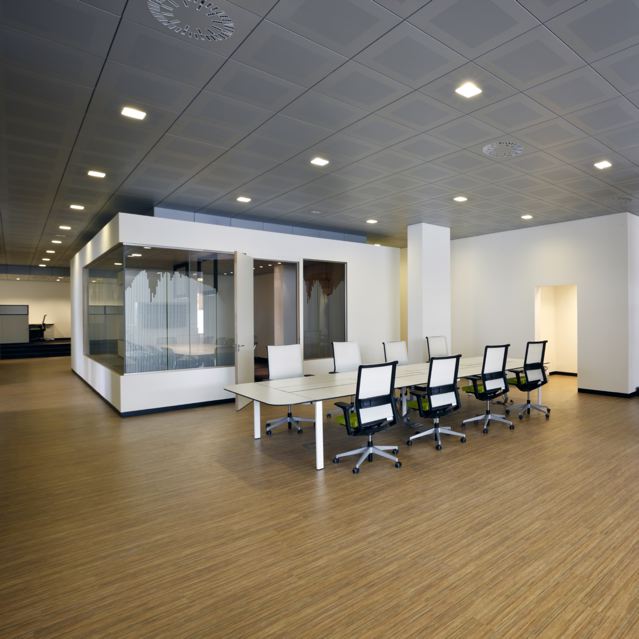 Post occupancy evaluations reveal that the acoustics in sustainable commercial interiors are typically worse than that of their traditional counterparts, a deficiency the United States Green Building Council is attempting to address with the introduction of LEED® Pilot Credit 24: Acoustics in November, 2010.

While an acoustic credit certainly helps draw attention to this vital aspect of workplace performance, it is also important to have a firm understanding of the elements involved in providing speech privacy and controlling noise, and why many of the current strategies used to improve airflow, temperature regulation, energy conservation and daylighting tend to lower acoustic performance.

The ABC Rule provides a good framework for this discussion. This acronym stands for the principal methods used by building professionals to achieve effective acoustics: absorb, block and cover.

Many green buildings feature an exposed deck. While it may assist with temperature regulation and day lighting, this tactic also eliminates what is often the most significant source of absorption in a facility: a suspended ceiling. Ideally, open spaces should feature a ceiling tile with at least a 0.75 Noise Reduction Coefficient. Tiles used in closed spaces should have a high Ceiling Attenuation Class, because they will be better at containing sounds.

If this route is not taken, absorption needs to be provided by other means. Even adding absorptive panels to 30 percent of the deck will have some impact. Another option is to use vertical baffles. If a concrete deck is not being used to implement passive heating/cooling, but an open ceiling is still desired, an alternative is to use a perforated and corrugated metal deck with an absorptive material placed behind the perforations before the concrete is poured.

Soft flooring should be used to reduce footfall or ‘traffic’ noise.

Green buildings generally feature a large percentage of open plan. In these areas, the height of workstation panels is essential to blocking noise. Panels should extend beyond seated head height (60 to 65 inches) or they will do little more than hold up the desks. If day lighting is a concern, compromise by using absorptive panels to a 48-inch height and top them with 12 inches of glass or another transparent material. Also ensure that the panels have a high Sound Transmission Class and that they are well-sealed along any joints, with no significant opens between or below them.

In order to reduce waste, many green designs use movable walls to create private offices and meeting rooms. However, these walls may not provide the level of sound isolation needed from one space to another. Gaps along the ceiling, exterior walls and floor should be addressed during installation. A good septum dividing each side of the wall is also advisable in order to prevent sound leakage along any cable raceways.

Many people believe they will achieve effective acoustics by implementing just these first two strategies: absorbing and blocking noise. While important, these methods simply reduce and contain noise. The final step of the ABC Rule involves ensuring that the background sound level in the space is sufficient to provide speech privacy and reduce the amount of disruption caused by the remaining noises in the space.

The background sound level in most conventional offices is already too low. The use of high-efficiency heating and cooling systems means that it is generally even lower in green buildings. Conversations and noises can easily be heard, even from afar, and are more disruptive. These problems are exacerbated when open windows are used to assist with air circulation, allowing exterior sounds to drift inside.

A networked sound masking system should be used to replenish the background sound level and maintain it at an appropriate volume, which is typically between 40 and 48 dBA in commercial interiors.

This type of system consists of a series of loudspeakers that are usually installed in a grid-like pattern in or above the ceiling. Unlike airflow, the sound they distribute is continuous and has been specifically engineered to increase speech privacy. Masking also covers up intermittent noises or reduces their impact by decreasing the amount of change between the baseline and peak volumes, improving overall acoustical comfort. Finally, by using a networked masking system, users have the flexibility to easily make adjustments to its setup as their needs change (e.g. volume changes in a specific area).

Attention to acoustics does not have to be at odds with sustainability. Indeed, one could argue that providing a fully functional environment is vital to creating a truly ‘green’ space: one that, as the U.S. Green Building Council stipulates, not only wastes minimal resources, but is also healthy and nurturing to occupants. Though applying the ABCs incurs some cost, even a small positive impact on productivity can easily outweigh this initial investment.

Niklas Moeller is vice-president of K.R. Moeller Associates Ltd., a global developer and manufacturer of sound masking system, LogiSon Acoustic Network (www.logison.com). K.R. Moeller is headquartered in Burlington, Ontario, Canada. He can be reached at nmoeller@logison.com.