A glimpse of Toronto’s future 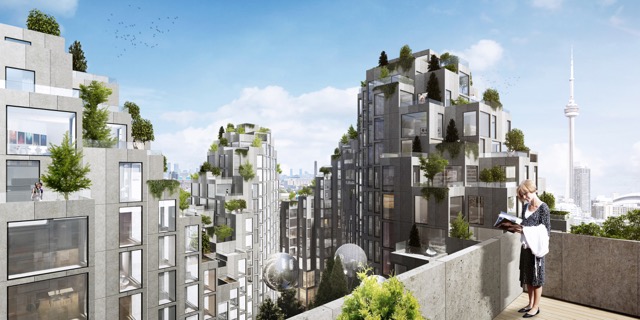 A glimpse of Toronto’s future

It’s not exactly a walk on the wild side, but standout architecture firm Bjarke Ingels Group (BIG) has definitely stepped outside the box with its much-heralded King Street West project.

Breaking with tradition in many ways, the design in the transitional area of Toronto will stand out among the tall towers of the central business district to the east, and the low-rise neighbourhoods in the northwest. Featuring extensive greenery, there is a direct attempt to provide a stretched-out suburban feel with dense urban look. In fact, BIG’s idea has been compared to what a youthful Moshe Safdie brought to his Habitat for Montreal’s Expo 1967.

“With King Street West, we wanted to find an alternative to the tower and podium you see a lot of in Toronto and revisit some of Safdie’s revolutionary ideas, but rather than an utopian experiment on an island, have it nested into the heart of the city,” says Ingels, Founding Partner, BIG. “It would be strange if one of the most diverse cities in the world had the most homogenous architecture.” Designed for Allied Properties REIT and Westbank Corp, the residential development juts up to a maximum height of 17 storeys, but with varied rectilinear volumes stacked together. The tallest parts would be away from the street, where the restoration of heritage buildings will be featured.

In the middle will be a sprawling courtyard, enhancing the striking design and brokering an intimate communal setting. The staggered residential levels aren’t simply aesthetic in nature – they serve to maximize residents’ outdoor space, with varying views facing a mix of terraces. Covering about 725,000 square feet, with plans for 500 apartment units, BIG touts the design as featuring pixelated patterns, with up to a dozen different floor plans offered.

Each pixel is set at the size of a room; rotated 45 degrees from the street grid to increase exposure to light and air. At the base, pixels lift to provide 24/7 acces across the courtyard, while the roof surface is manipulated to allow sunlight to penetrate the entire building, creating space for green terraces attached to each unit. Landscape architects Public Work have been brought in to assist with the challenges of creating sustainable greenery in the rambling gardens, but the results could undoubtedly be worth the considerable effort.

Located at the meeting point of three 20th century neighborhood parks, BIG, Westbank and Allied will provide a mixed-use development with a public plaza that will create a new centre for the community while connecting the various pedestrian pathways that crisscross the area.

The building is organized as a traditional perimeter block with a public plaza in the centre. The courtyard itself is defined by two distinct atmospheres: a lushly landscaped forest paired next to an urban, hardscaped court. A BIG spokesperson says the resulting balance between these perceived opposites is a reflection of Toronto’s current state of rapid redevelopment: the union of old and new, an open community atmosphere in an intimate setting, calming green scenery within a bustling urban context. Surrounding the plaza, King Street West (currently in progress) will rise to create space for housing, retail and boutique offices – avoiding the footprints of heritage buildings that already exist on the site.

The resulting undulating façade is a connective topography – allowing increased circulation through the neighborhood while creating an abundance of green space normally reserved for the suburbs.