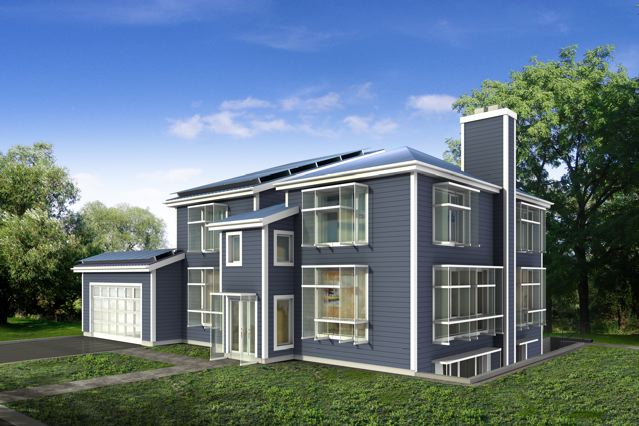 For the community in the Yonge and Sheppard area of Toronto, 84 Norton Avenue may become a field trip destination for sustainable living. Homeowner Jason Alleyne, his wife Paula and son Sebastian are comfortable with being the home’s ambassadors.

“We were living in that property for 4-5 years before we began this journey of reconstruction,” says Jason. “The whole living space was challenged. There were three consecutive winters of basement and roof leaks, and then we uncovered an area of asbestos. Bottom-line, it was just a poorly constructed edifice and we needed to build a new home.”

The experience made the Alleynes think about sustainable living. They didn’t want to live in a home for only five years. For Jason, “It’s about a house built for multiple generations and should work as well today as it will 100 years from now.”

Inspired by the David Suzuki documentary Visions of the Future, the Alleynes, who are actuaries by profession, interviewed some of the architects in the program. One of the key takeaways was the importance of putting everything together from the beginning. To achieve sustainable living, it’s not just a checklist of 88 points to achieve LEED Gold certification. The house has to work as a system.

“There was a lengthy integrated design process,” says builder Mike Manning, President of Greenbilt Homes. “Working alongside architect Paul Dowsett of Sustainable TO and the Alleyens, we built a very technologically advanced home. Some of the features include a 10-kilowatt solar collection system that is part of Ontario’s microFIT program. There is also a geothermal system with radiant floor heating.”

For the Alleynes, having a clean and healthy home was important. “Not having duct work and venting in a home was something we stressed when we were first designing the house,” Jason explains. “The home is constructed with Durisol-insulated concrete forms, which means the building envelope is going to be air tight and well insulated.  We also wanted breathable walls, so instead of covering them with drywall,  a clay finish was added. Obviously we chose LED lighting, and we also made sure there was little off-gassing in the materials we used. Most importantly we wanted to make sure to have a net zero home. So our house would still be functioning – no matter the interruption, it would be able to sustain itself.”

Decisions were always based on an integrated design philosophy.

“All the windows will be triple pane and there’s even grey water recycling,” injects Manning. “The floors are polished concrete, and we are going to use an earth plaster finish on the exterior walls to help the house breath better.  It will also have a metal roof.”

Manning suggests most houses in North America are built for a 50-60 year lifespan.  This one is incorporating a better quality designed home with a generational lifespan. “There’s a little bit of a premium that goes into building a better product – but if you spread those costs over a little longer time, then you really see the benefit of why it is better to build a better building in the first place. And when you can live in a better built home and reap the benefits of a healthier lifestyle – all of a sudden it’s a tangible reason to build better in the first place, ”says Manning.

Building green of course has its challenges. The biggest was finding the right people who understood the designs had to work together.

“Mechanically you have geothermal and radiant floor heating, HRVs and air circulation, electrical and plumbing to contend with. But how do you make it all mix and work together?” points out Manning. “Building a sustainable home is new,” says Jason Alleyne. “Dowsett, our architect, was a great find. But we are all at different levels of understanding of what green building and what sustainable living is – but we are learning together.”

“To build green you need an architect who can design the holistic approach to the structure. You need to find a qualified contractor who understands how to put these pieces together. But the core component of green that actually might stop someone is the value proposition,” says Jason.

Jason believes if that’s the hurdle that’s stopping you, an actuary who’s qualified to help you crunch those numbers can help overcome this concern.

“Our architect Paul Dowsett has picked up on that,” says Jason. “Clients are stumbling on the most important pillar – can I actually afford to do this?  If we can get people past that hurdle – sustainable living and building green is attainable for the masses.”

As Mike Manning sees it, “Building green is an à la carte menu – there is no formula that you have to buy into. People can get involved as far as they feel comfortable. But consider the changes to the Ontario Building Code (OBC), as of January 2012. The OBC used to be lower and now it’s come up to the ENERGY STAR level. LEED, as another certification, can go even higher than that. Now people have an opportunity to shop, and compare a conventional built product and a better-built product for really not much more  – it’s a no brainer. People will always go for the better product.”