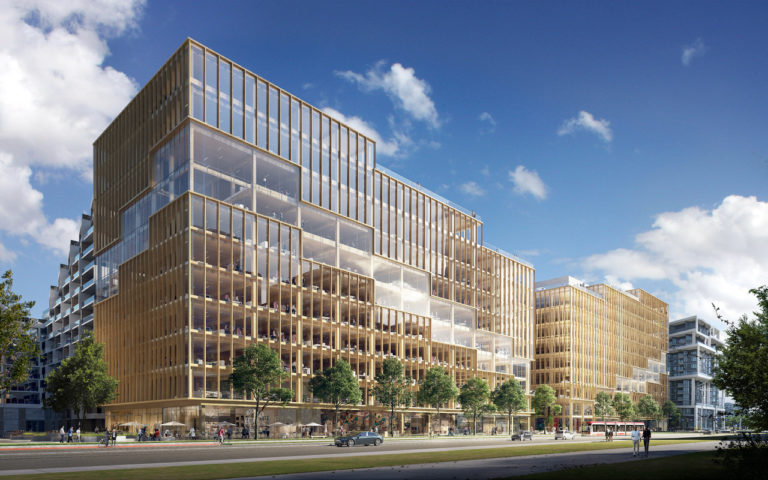 International real estate firm Hines has announced plans for T3 Bayside, the first office building in Toronto’s emerging Bayside community, located on the shores of Lake Ontario. Designed by the renowned Danish architecture firm 3XN, the 10-story structure will stand at 42 meters high, becoming the tallest timber office building not only in Toronto, but in all of North America.

3XN was selected by Hines to design an office space as part of the unprecedented 2,000-acre revitalization initiative that will transform Toronto’s waterfront. T3 Bayside joins 3XN’s two residential buildings in the area, Aqualuna and Aquabella, which activate Toronto’s newest and most dynamic live-work-play community. The new building and adjoining plaza will serve as dynamic visual and pedestrian gateway to the entire neighborhood, connecting residents and visitors to the revitalized waterfront.

“With 3XN’s world class design and the building’s unrivaled amenity offering, T3 Bayside will truly set a new benchmark for creative office space and will ultimately be responsible for creating more than 3000 jobs at Bayside,” explained Avi Tesciuba, Senior Managing Director and Country Head from Hines. T3 Bayside is designed to reflect and emphasize the emerging neighborhood in which it sits, a community modeled around the intertwining principals of life, work, and play, offering a multitude of opportunities for the next generation of Torontonians. The building creates a continuously activated ground level, with abundant retail opportunities available on all sides. At the base of the building a new central plaza has been created, around which are additional stepped community and shared spaces, including exhibition and gallery spaces, flexible offices space and coworking facilities.

“We are honored to contribute to the development of this new neighborhood in Toronto,” said Kim Herforth Nielsen, Founder and Creative Director of 3XN. “3XN believes in creating buildings that focus on people and contribute to the public realm, which is our aim in this project as well. WithT3 Bayside we created flexible office spaces that can meet the requirements of a diverse group of tenants both at the moment and in the foreseeable future.” Located at the northern edge of the Bayside development, situated along Queens Quay East and flanked by Merchant’s Wharf, T3 Bayside presents an opportunity to enhance and enforce the existing master plan on multiple levels. Through a series of stepped roof terraces, the building strengthens and emphasizes the movement and heights of the existing master plan at either end of the site. The same terraces step downwards toward the plaza, a new urban gateway and focal point that invites visitors and residents alike into the Bayside community as a whole. T3 Bayside marks the entrance to the neighborhood, leading all visitors toward the new waterfront promenade and thus connecting the city of Toronto with Lake Ontario.

Equal parts urban market, social space, and landscape, the new plaza is the public heart of the T3 Bayside project. Along the edge of the central plaza, corner lobbies, retail and café spaces are designed with flexibility and operability in mind. The building incorporates flexible event and community spaces that face the plaza on multiple levels, all of which can be used individually or booked together to facilitate various programming and events throughout the year. In this way, all activities within the space are visually connected to the central plaza, assuring that activity within the building is part of the exterior experience as well. T3 Bayside will be the tallest timber office building in North America. The use of timber contributes to the sustainability of the building, both reducing construction time and allowing the building’s elements to be easily disassembled and re-used for other purposes.  The idea of using timber was suggested by the developer Hines. The materiality of timber defines the unique interior aesthetics and will also be reflected in the exterior of the building. Both the material and the shape of the wooden frame will ensure great acoustics. The use of wood, a breathable and absorbent material that allows the release of moisture, ensures a naturally regulated and healthy indoor environment.

“Canada, with its great forests, seems a natural place to build the tallest timber office building in North America and we are excited to be part of this development,” said Jens Holm, Partner in charge of 3XN North America and Head of Design for the T3 project. “The wooden structure will be a prominent part of the design and provide a warm tactile environment for the tenants that doesn’t compromise sustainability. The flexible layout will be able to meet the diverse needs of the users and bring people together.” T3 Bayside brings together a flexible office space with a mix of coworking and community spaces, offering an experience that appeals to a broad array of tenants. The shared office spaces each hold the potential to combine intimate, single-height zones and social, double-height zones that suit ideas of coworking and are designed to accommodate a variety of programs. These office spaces can be directly connected to the lobby and help to activate the central plaza. Diagonal cuts in the building volume break the massing down to a more human scale around the plaza, and build back up to city scale as they rise across the façade.

3XN is one of Denmark’s most-renowned architecture firms. Since it was founded in 1986 by Kim Herforth Nielsen, 3XN has been advancing Scandinavian traditions of clarity and generosity in architecture and translating them for a global audience. The firm’s work is grounded in ongoing research into how buildings reflect and influence human behavior and the environment, which results in innovative solutions to increasingly complex contemporary challenges. Among 3XN’s highest-profile projects are Olympic House, the new HQ for the International Olympic Committee in Lausanne, Quay Quarter Tower in Sydney, The Blue Planet (National Aquarium) and Royal Arena, both in Copenhagen, and the Museum of Liverpool. Based in Copenhagen, the firm also maintains offices in Stockholm, New York, and Sydney.