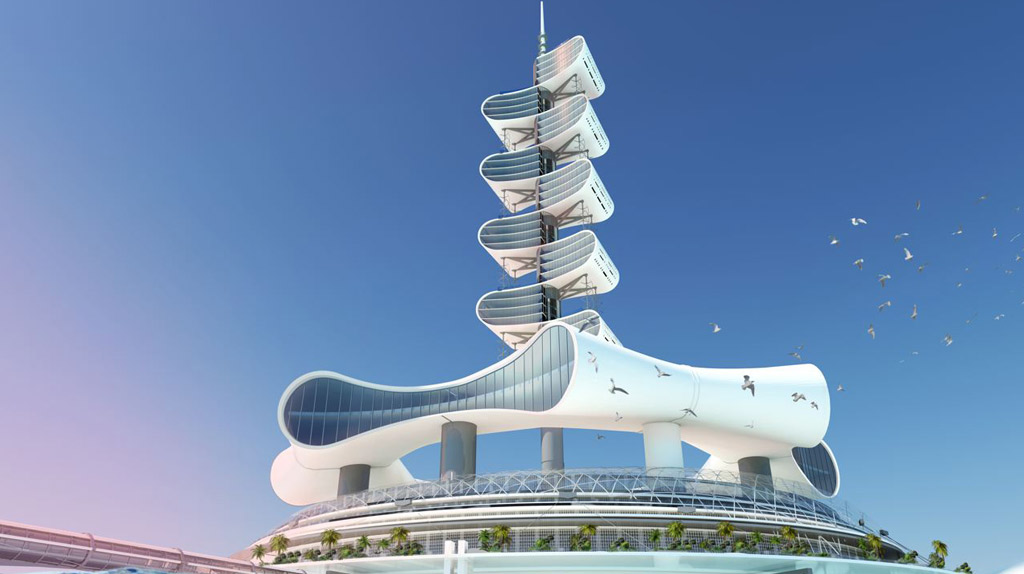 It will undoubtedly be one of the most dynamic 50th anniversary celebrations of all time.

How else would one begin to describe what is being planned for Cancun, Mexico, in 2020? Architect Richard Moreta Castillo envisions a self-sufficient eco-resort, called Grand Cancun, which will ostensibly generate renewable energy as well as clean up the ocean around it.

This floating island, a grand offshore marine platform to be built on stilts, will include all the usual luxury components, plus loads of shopping and underwater dining. But it’s the sustainable touches that set this project apart.

Solar panels will cover the surface of the offshore platform, providing energy for the resort and the city of Cancun’s grid. Even more clean energy will be produced by underwater tidal wave energy collectors and vertical wind turbines. Making the complex completely self-sufficient will be a rainwater collections system that will tie into a mini desalination plant.

Of special note is the centerpiece of the design. The shape of the structure’s main building is snake-like. Originally, the Mayan name Kaan Kun, or Nest of Snakes, evolved into the present-day Cancun, hence the tie-in to the Mayan snake myth.

“This awesome eco architecture contributes to the myth and raises the serpent from water to infinity, a great representation of exceptional harmony between Mayan people and their new metropolis,” according to promotional literature for Grand Cancun.

Conceived to fight global warming, the Grand Cancun design will not simply address the energy crisis and local fossil fuel dependency, organizers says, but also address other problems such as scarcity and depletion of its groundwater table and drinking water, the pollution of coastal shores, and alleviating construction space limitations due to an overdeveloped coastal area.

“Grand Cancun will be the first marine platform designed to help recover the environment instead of exploiting it,” organizers say. “There are 3,850 oil rigs in the Mexican Gulf. Using the platform concept instead of an artificial island, it creates more space and minimizes the impact in the marine ecosystem.

“But the most interesting thing is that it will clean the seas. The technology planned will separate the water from floating solids and hydrocarbons.”

(Project Grand Cancun was singled out from among 70 entrants for the Radical Innovation in Hospitality Award and won first prize in the National Architecture Awards of Dominican Republic in 2012.)