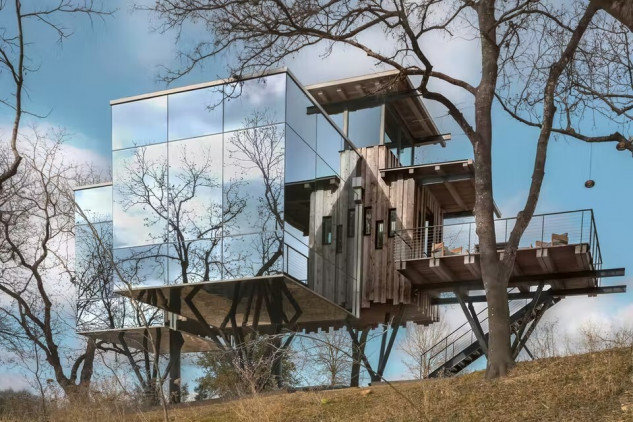 The design of the house, which seems to be suspended in the air and is located in Texas (USA), is inspired by the sketch of the owners’ daughter Imagination is one of those qualities that boys and girls almost irremediably have. Unfortunately, many of us lose that capacity that we once had and with which we create fantastic worlds tailored to our needs. Fortunately, some still have this gift, and even apply it in their daily lives or at work. And the world of architecture is one of the most conducive to it, as this tree house in a backyard demonstrates, built by Ryan Street Architecture Studio in Austin, the capital of the state of Texas , but inspired by the drawings of the daughter of the owners.

Designed primarily to be a backyard play space for their two daughters, the couple decided to turn the treehouse into something much larger. Atop a system of pilings that mimic clusters of tree branches, the Tree House almost seems to float above the clearing below . To build the treehouse, the studio had the support of a local company, Escobedo Group, known for developing a prefabricated panel system called Dario . The company builds the panels off-site at a state-of-the-art facility in Buda, Texas, and then transports them directly to the job site. Once they arrive, they can be assembled in a matter of days instead of months.
The construction is covered with uneven and incongruous wooden slats, extracted from some fir trees. In this way, a certain coherence is maintained with the couple’s main residence, located just a couple of meters in front of the Tree House. Although the sketch became the main and main source of inspiration, this is not the only one. The environment in which it is located is the second leg on which the design of Ryan Street Architecture Studio has been supported. In fact, one of the most characteristic elements are the mirror panels on the façade that allow the reflection of everything that surrounds it . These create the illusion that the trees and greenery are closer than they really are, giving it a more magical and lush touch. Built in a factory, the panels were transported from the Escobedo Group factory to the site chosen for their construction. In this way, the concern for sustainability and the environment materializes , avoiding excess waste and speeding up the process of assembling the house.

Outfitted with plumbing and electrical rooted in the house’s steel stilt supports, while the exterior may appear crudely refined, the interior is as comfortable as any hotel . With a single room located on the first floor of the house and a loft-type room with two beds, this tree house has a marked multifunctional character, since it can be used to accommodate a family that wants to rest in a natural environment or to accommodate guests. The cabins in the trees of A Coruña that collect Architecture awards
In the province of A Coruña, looking at the mouth of the river Tambre, there are some special cabins. An almost perfect accommodation where you can experience the tranquility of the Galician forest perched on a tree. The dream space for lovers of design, architecture and nature. Cabaniñas do Bosque De Outes are 41 cabins built on top of hundred-year-old oak trees or on sheds rehabilitated with recycled materials and using clean energy. In 2020 the Albeida cabins received the Architecture Award.